Mercy Ships is a faith-based international development organisation that deploys hospital ships to some of the poorest countries in the world, delivering vital, free healthcare to people in desperate need.

In sub-Saharan Africa, up to 69% of people live on less than £2 a day. Healthcare in these countries either doesn’t exist or is unaffordable to the vast majority of the population.

As well as completing thousands of urgent operations onboard its floating hospital, the Africa Mercy, Mercy Ships volunteers also work closely with host nations to improve the way healthcare is delivered across the country, by training and mentoring local medical staff, and renovating hospitals and clinics.

Mercy Ships doesn’t just address the immediate need on the ground but also works to strengthen the country’s healthcare systems and drive policy change. The aim is to tackle the root causes of the problems rather than just the consequences. 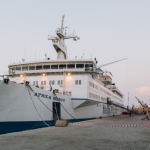